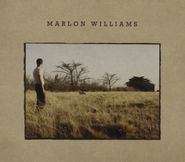 Leave it to the ur-wild west of New Zealand to raise a new voice in country that brings originality and fresh air into a genre that can sometimes get stale. Bringing back the urban cowboy sound of Jackson Browne and Warren Zevon, Marlon Williams creates haunting and sparse melodies that just bleed with tragedy. The first and jauntier half of the album is pure rock/country fun that feels stuck in a late '50s time capsule, but it's the second half that shows his talent as a lyricist and his unique take on the country twang. And in the tradition of New Zealand musical weirdness, the music doesn't let you off with simply nice melodies and a beautiful voice. Songs dissolve and self-destruct in noisy, Neil Young-influenced feedback that leaves you shaken. But before you know it, you're lulled back into the next beautiful melody. Marlon Williams is the real deal and a true talent to watch.