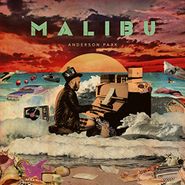 This is not yo mama’s soul music, but it could be. Beat-laced funky rhythms with live instrumentation get the breezy treatment… Modern songwriting sensibilities, raw heart, sexy serenades and gritty street talk dipped in honey will pour from your speakers.

Anderson .Paak has been the go-to guy to feature when artists have wanted their tracks to have a certain something special. His voice is a malleable instrument than can be gravelly or velvety smooth, able to deliver fast-paced raps and pour out soul syrup in equal measure. Though his debut, Venice, drew plenty of attention and acclaim, he’s now been lifted up into the upper echelon of R&B artists working today, thanks to a series of high-profile collaborations with Dr. Dre on his comeback album, Compton, on which Anderson .Paak consistently threatened to steal the show on his six tracks. He takes that opportunity and knocks it out of the park with Malibu, a gorgeous psychedelic swirl of lush neo-soul backdrops and alternative hip-hop tracks, featuring a cadre of high-profile guest apperances (Talib Kweli, ScHoolboy Q, The Game). Gorgeous tracks like “The Birds” evoke the classic soul stylings of a Marvin Gaye or Al Green. Yet he keeps things current on the jazz-inflected hip hop of a track like “Heart Don’t Stand a Chance” or thumping banger “Come Down,” keeping in line with the likes of Flying Lotus and Kendrick Lamar. As the lines further blur between the experimental and mainstream, vintage and current within hip hop, Malibu masterfully strings these styles together for an accessible, highly listenable album that should make Anderson .Paak a deserved star in his own right.