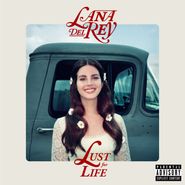 Tracing Lana Del Rey’s career trajectory up to this point reveals a sneaky, subtle transformation of her sound. On Lust For Life, her fourth studio LP, we witness the most dramatic deviations from this formula yet. To be clear, the Lana Del Rey of old is still alive and well. Ever since her breakout moment of 2011’s “Video Games,” the artist has been defined by very specific signifiers: a love of strings and '50s/'60s pop ornamentation filtered through modern production, an almost Lynch-ian fetish of the dark underbelly of Americana, and a penchant for dwelling in the melancholy. “Love,” the first single from Lust for Life and a slow burning ballad that could easily fit on any of her past three albums, addresses familiar themes, including youth, melancholia, aimlessness, and…um, love. But while in the past Lana has played with hip-hop influences, on “Summer Bummer” she delves headfirst into the genre, enlisting the services of Playboi Carti and A$AP Rocky (another aesthetically-savvy artist) over an honest-to-god trap beat, albeit one with an undoubted moodiness that belongs squarely in Lana’s world. Even the single’s cover art portrays Lana in dark black attire and ‘90s-chic choker necklace, a far cry from her well-established Nancy Sinatra/flower girl inspired garb. As a new development to her usually insolated approach, cameos are in abundance on this record, featuring the aforementioned A$AP Rocky twice among the likes of Stevie Nicks, Sean Lennon, and The Weeknd, who appears on the title track. Sounding like a marriage of Berlin and the Shangri-La’s, “Lust for Life” pairs The Weeknd’s falsetto with Lana’s breathy tenor on a duet that conflates hedonism with tenderness. It is the closest flirtation with mainstream pop production that has ever graced her music, but you wouldn’t mistake it for anything but a Lana Del Rey song. In a way, this demonstrates the biggest accomplishment of Lust for Life: the ability to evolve and expand a previously rigidly defined musical style while still sounding like nothing else.