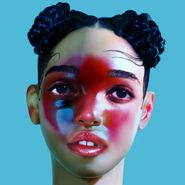 FKA Twigs is the stage name of singer/songwriter Tahliah Barnett, who together with a team of some of the best producers working in pop music (Blood Orange’s Devonté Hynes, Clams Casino and Paul Epworth of Adele/Coldplay fame, among others) come up with one of the most brilliant debut records of 2014. What at first sounds like icy, alien R&B ends up feeling amorous, empathetic and intriguing to no end. Songs like “Lights On” at first sound not so out-of-time, fitting in nicely with the adventurous alt-soul stylings of The Weeknd or current Beyonce, but the songs are continuously chewed up and breathed back out into wondrous concoctions that bear little resemblance to anything else out there. Vocally, Barnett calls to mind someone working to effect change within the mainstream like Aaliyah once did as much as she does weirdos like Yma Sumac and Bjork (especially on the bold “Preface”), her airy voice warping into new dimensions yet latching onto reality on the touching “Two Weeks” and suddenly coming through clear as day as she pleads with sexual abandon through classic soul phrasings for a would-be lover amid analog-sounding robotic textures. As much as FKA Twigs is a product of a time in which introspective artists who allow for empty space to permeate their music are the norm, from The XX to How to Dress Well and James Blake, Barnett’s music feels more fun to listen to and not at all dreary, even if mostly downtempo. “How would you like it if my lips touched yours?” she suddenly entreats in the laser-streaked “Hours” and it’s hard not to think of some fantastical Janet Jackson comeback. “Video Girl” is more direct, asking “is she the girl from the video?” (Barnett has a background as a backup dancer in music videos) as Barnett goes on to prove she’s a lot more than that through stunning lead and layered vocals while the song’s lush, post trip-hop music sways and lurches sensuously. But “Pendulum” will no doubt be her entrée to most audiences, as the Epworth production literally knocks on your door with its stuttering beat and introduces a girl capable of delivering a Prince-level combination of heartache and confidence while keeping sly pop hooks on the backburner right until they’re ready to sizzle. It makes you happy to be listening to pop music in this day and age when something so exciting as this will bubble to the top.