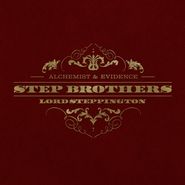 Just as Killer Mike and El-P's Run The Jewel's side project kicks some serious ass, so too does the Step Brothers - the combined power duo of Dilated Peoples emcee (and producer) Evidence and Shady Records producer The Alchemist. Their flawless, 14-track album as the Step Brothers, Lord Steppington, features the lead single "Step Masters." The pair have teamed up together in the past, but this is the first time they've collaborated on a full-length together. On Lord Steppington, the seasoned pair present a pure hip-hop vibe that sounds new while simultaneously sounding rooted in the best classic '90's hip-hop, complete with perfectly selected album guests such as Roc Marciano, Fashawn, Blu, Styles P, and Action Bronson (who guests on "Mums in the Garage," the album's second single). Listening to the album you can hear their collective skills as producers and mic-wreckers and knowledgeable crate diggers with a wicked sense of humor (check their Amoeba Music "What's In My Bag?" video shot at Amoeba Hollywood). To top it off, the album is presented in a nice velvety packaging that reportedly delayed the release by a number of weeks since it took longer to manufacture than standard packaged releases.