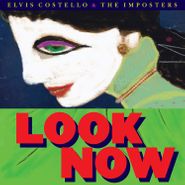 At this point, Elvis Costello has truly done it all. Out of nearly any living musician, it would be understandable for him to rest on his laurels at this point, yet the dude never stops giving us more and more. With his album count already well into the thirties, Look Now finds new ways to tweak the sound that has unquestionably become his own, which is, at its heart, a blend of Bacharach-inspired pop classicism and good old fashioned rock ‘n roll. Taking the ornate and lavish orchestration of Imperial Bedroom as a starting point, Costello modifies this formula to feature a heavy '70s soul influence, from the subtle Shaft guitars that pop on “Unwanted Number” to the Philly sound strings that grace “Suspect My Tears.” There are backing vocals all over the place, easily the most on a Costello record since the R&B-loving Punch The Clock, and they provide an authentic texture to complement Costello’s nostalgia and are a perfect counterpoint to his nasally baritone. Look Now is the sound of a genius; endlessly, restlessly tinkering with the music he loves.