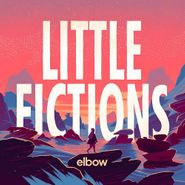 Though still a cult band stateside, Elbow’s status as Britpop’s vanguard elder statesmen was cemented with the release of their last album, 2014’s The Take Off and Landing of Everything, which topped the British charts upon release. It’s time for yanks to take notice. The band’s seventh studio album, Little Fictions, luckily doesn’t suffer much from the recent departure of drummer Richard Jupp, judging by the thoughtful percussion that provides the clanging underpinning of “Gentle Storm” or shuffles insistently underneath “Trust the Sun.” Elbow still write the kind of understated, uplifting anthems Coldplay wish they could. Opener “Magnificent (She Says)” lives up to its name, a gorgeous slow-burner buoyed by looping, syncopated guitar riffs, soaring synth strings and Guy Garvey’s lovably British romantic croon. Elbow remain adept at wringing majesty out of simple elements, like the cascading echoes of vocal and handclap rhythms of “K2.” And they remain masters of balancing the adult textures of a Talk Talk with arena-friendly sounds and sentiments—“What does it prove if you die for a tune? It’s really all disco,” Garvey belts over a luxurious symphony of shimmering guitar and hymn-like accompaniment. It’s another small miracle of an album from Elbow, and one worth cherishing.