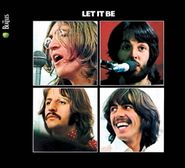 By the time Let It Be was released, the Beatles were no longer a band and each member had recorded a solo album. The songs, recorded prior to and during sessions that would produce the gorgeous Abbey Road, were shelved once that project became more viable. Despite, or because of the legendarily loose and fractious recording sessions, Let It Be is the Beatles most down to earth album. Probably the closest thing to their early days in Hamburg and at the Cavern Club, the sound is so immediate and raw you feel like you could join in at any time. Like lost garage anthems, “I’ve Got A Feeling” and “Dig It” are almost limitless in jam possibilities. The chugging “Get Back” rocks and rolls like it’s going out of style. “One After 909” is the very first Lennon/McCartney original boogies and shakes, and George’s slide-guitar gem “For You Blue” pays homage to the rhythm and blues that begot the band. John’s “Across The Universe” is a beautifully meandering meditation. The string-enhanced “The Long And Winding Road” is quite possibly the Beatles most melodic pop song. Paul’s powerful “Let It Be” is a touching and bittersweet goodbye in the context of the album. Only seven years after their first record, the Beatles would let it be forever.