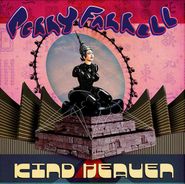 For the Jane's Addiction frontman's first solo album since 2001, he called on the likes of Taylor Hawkins (Foo Fighters), Elliott Easton (The Cars) and Dhani Harrison to complete his Kind Heaven Orchestra. “Pirate Punk Politician,” which rails against despotic rulers, blends Rage Against The Machine guitar riffs with a characteristic psychedelia. Opening track, “(Red, White, and Blue) Cheerfulness,” is another political rocker but from there, the still charismatic Farrell moves to more electronic sounds (“Spend the Body”) and hynoptic strings (“More Than I Could Bare”). The epic, orchestral “Let's All Pray For This World” shimmers with co-producer Tony Visconte's magic and is a definite highlight of this eclectic set.