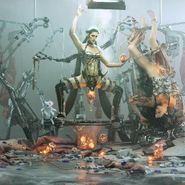 Arca’s KICK ii sounds like it came from the future. The Venezuelan producer/artist creates otherworldly bangers built from the bones of electronic, cumbia, reggaeton, and experimental music. Into this alternate dimension, Arca has invited Boys Noize and Mica Leva, fellow travelers in her epic, boundary-pushing sound explorations. Later in the album, Sia adds a diva star turn to one of Arca’s more straightforward tunes (and probably one of Sia’s weirdest). Maybe KICK ii is what the aliens are trying to beam us from several light years away.