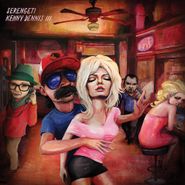 Why this most unique and endlessly talented Chicago emcee is not a huge star already is beyond me! But then again, no one ever said the music biz was fair. An ever-creative and prolific lyricist who conjures up engaging characters and builds whole stories upon them, Serengeti's latest concept album Kenny Dennis III continues an ongoing theme and by so doing delivers his finest release to date (about 20 EPs and LPs over a dozen years). With production by Jel and Odd Nosdam and prominent narration collaboration from Anders Holm (known as one third of the hilarious Workaholics collective from Comedy Central and is also in the brand new Chris Rock movie Top Five), Serengeti takes on the persona of his hilarious "Kenny Dennis" alter ego and weaves the engaging tale of a guy trying to get his career off the ground. As much a book on tape as a rap album, you really have to listen to it in its entirety and in its presented sequence.