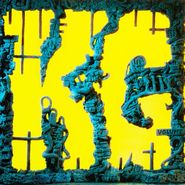 King Gizzard & the Lizard Wizard's new album KG serves as a sort of Volume 2 for 2017's Flying Microtonal Banana. Embracing classic psych-rock's Eastern music influences, while adding plenty of modern indie rock and world music flavors, the Aussie band delivers on a grand scale with epic, soundtrack-ready numbers like "Automation." "Straws In The Wind" is an intriguingly groovy and ominous track while "Ontology," with its near-frantic rhythm, is celebratory and danceable. There are even shades of desert blues rhythms like in "Minimum Brain Size," contrasted with hazy, Stones Roses-style vocals. Lots of good stuff here on this furiously eclectic and accomplished set.