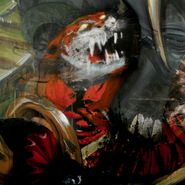 In the six years since their mammoth album, Treats, the 100 mph collision of shredding guitars, drum machines, distortion, and angelic pop vocal harmonies has created and sculpted one of the most unique and exciting sounds today. But after a string of quickly written, quickly recorded albums, Sleigh Bells slowed to a three year period to create their newest opus. Jessica Rabbit, recorded off-and-on by themselves and Eminem producer Mike Elizondo, revels in excess and maximalism as lead-vocalist Alexis Krauss and multi-instrumentalist Derek Miller cover every square inch of your ears with violent sounds. Their first album on their own label, Torn Clean, almost feels like a clean slate to reevaluate their sound and figure out new ways to make pop weird. Instead of creating layers of insanity with Krauss echoing somewhere among it, the sound is sharp and precise, showing off her chops as a pop star who, under other less-artistic circumstances, could sell out stadiums. "It's Just Us Now" starts off with a stuttering rhythm and oppressive drum clangs. The catchy melody then goes into avant-what! mode with a chorus that suddenly changes tempo drastically until the track disappears into a mellow synth memory. But "I Can Only Stare" might be the closest they've come to making a radio friendly track. The ear-bleeding guitars are traded up for keyboard parts out of '80s new wave and drum machines that are muffled to a dull bomp. The song is the perfect showcase for Krauss' unique voice, dynamic range, and her ability to conform to a more "normal" song. Though Sleigh Bells is becoming more professional and clean, their unique sound is still enough to garner strange looks from people not prepared for the mix of noise and electronic pop. Jessica Rabbit is their most fully formed and mature album to date.