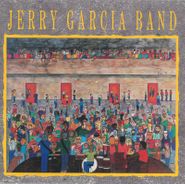 The Jerry Garcia Band’s self-titled live album gets the 30th anniversary reissue treatment with this comprehensive 5-LP box set, out courtesy of the good people at ATO Records. Available in a limited edition pressing of 10,000, each LP is pressed on 180 gram vinyl—all the better to savor the sweet sounds of the band’s appearance at The Warfield in San Francisco, coming to us all the way from 1990. Featuring the unbeatable lineup of Jerry Garcia, John Kahn, Melvin Seals, David Kemper, Gloria Jones, and Jacklyn LaBranch, this Deluxe Edition is really something to celebrate. A landmark album, now available in an equally solid reissue format.