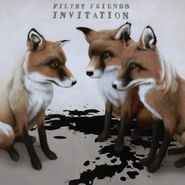 Alt-rock super group Filthy Friends bridge a grand swath of eras and influences in their make-up, composed of Corin Tucker of '90s heroes Sleater-Kinney, Kurt Bloch of underground Seattle punks The Fastbacks, perennial industrial rock drummer Bill Rieflin, bassist Scott McCaughey of the Young Fresh Fellows, and of course Peter Buck, guitarist of a little known band called R.E.M. An exhaustive list of expectations might be anticipated, to be sure, but Filthy Friends cut through that noise by playing their hearts out on an album of simple but deftly performed rock ‘n roll indebted to the heyday of alt rock. Jangly power pop hooks over angular song structures overlaid with superwoman vocals. The '80s underground and '90s underground all rolled into one package, and for once that's not hyperbole.