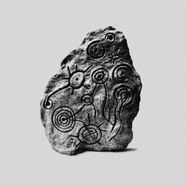 Amazing new album from the Border Community boss. It's been seven years since Holden's last full-length statement, time the producer has spent immersing himself in krautrock and the american lo-fi underground. The resulting album is loose and heavy on one-take modular synth recordings. The album stands in contrast to a deluge deluge of predictable, compressed dance productions.

That said, Holden's made it clear that this is dance music, of a sort, and when the acoustic drums emerge on "Renata" (conveniently timed at 120 bpm), this assertion rings true. That said, there's nary a kick drum intro on this album, and the pool of influences is much deeper than your average club ready 12". "Inner-City 125" is a more ominous take on The Caretaker's ballroom ambience, "Rannoch Dawn" sounds like the Rune Grammofon camp's take on shambolic Krautrock, while "Seven Stars" sounds like a PBS Mystery!  soundtrack obscured by analog extrapolations. Only "Gone Feral" hints at the wooly pastoralism of Holden's previous productions.