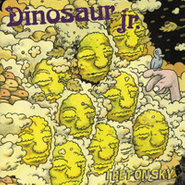 Dinosaur Jr. have been on a tear since reuniting in 2005, releasing now three albums, rather than touring just on old hits. Whereas Beyond and Farm seemed intent on creating the same sort of body-realigning noise of their older albums, I Bet on Sky highlights the band’s more sensitive material. “Can I walk alone? … How far should I go?” J Mascis sings on the beguiling “Stick a Toe In,” a striking reminder that Mascis is as strong a songwriter as he is a shredder. “Don’t Pretend You Didn’t Know” uses its guitars to texture a song-first composition, while “I Know it So Well” surprises with bluesy swagger and wah-wah guitar fun. A wonderful addition to the newly reformed Dino Jr. on this album, too, is the return of Lou Barlow as a songwriter and singer for the band, turning in a couple of the album’s most tuneful tracks, “Rude” and “Recognition.” They still unload plenty of guitar noise, like on the solos of “Watch the Corners,” but I Bet the Sky is also a nicely rounded album and shows there’s more to Dinosaur Jr. than guitar theatrics.