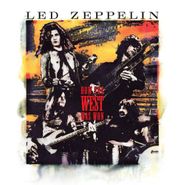 In a way, it seems strange that the seminal live document How The West Was Won was released only fifteen years ago when, especially to younger fans, it feels like the thing has existed forever. No other band is quite as mythical in stature like Led Zeppelin, as encapsulated by the monolithic (ahem) presence of their studio records, their legendary musical prowess and indulgences onstage, as well as their infamous/apocryphal exploits off. Yet for all their rock god grandeur, one of the side effects of Zeppelin’s tightly-controlled legacy has been a lack of official concert releases. While their abilities onstage were well documented and regarded, the band only released a single live album during their existence, the somewhat underwhelming Song Remains The Same. That all changed in 2003 with How The West Was Won, a triple disc set that documented two shows from their 1972 North American tour, one at The Forum and the other at the Long Beach Arena, during a period that has generally come to be regarded as the band’s peak as a live act. Finally, it was possible for the average fan to hear what had previously only been available on dusty, hard-to-find bootleg LPs. Fifteen years later, that same recording gets a facelift by being remastered and released across multiple formats, including the album’s first ever pressing on vinyl. If you’re looking for the apogee of classic rock; the zenith of what Zeppelin was all about, you found it here, drum solos and all. This time it sounds better than ever.