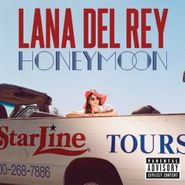 No one in pop music plays with the line between artifice and reality like Lana Del Rey. And no one does this kind of thing with this much panache, either. Honeymoon is the most thorough portrayal yet of the tragic “gangster Nancy Sinatra” character Del Rey and her people have created. “It’s not fashionable to love me,” she sings knowingly on the title track, full of schmaltzy, over-the-top strings and lyrics of undying emotion. “I like you a lot, so I do what you want,” she sings in submission on the immaculately produced “Music to Watch Boys to,” with vintage keys and Bond strings laying the groundwork and Del Rey’s feathery voice appropriately wrapped in gauzy reverb. Musically, it splits the difference between the anything-goes attitude of Born to Die and more thematically unified Ultraviolence, as the minimalist hip hop beats of tracks like “High By the Beach” and “Freak” are welcome detours from the ballads. But it’s the torch songs that carry the most head, thanks to Del Rey’s absolute dedication to the persona she’s created and all the camp and playfulness that comes along with that, not to mention a voice that’s grown notably richer over the past few years. Things definitely get silly in the lyrics department, but the music can usually overcome this — “Terence Loves You’s” “I lost myself when I lost you, but I still got jazz, when I’ve got those blues” doesn’t make a lick of sense, but it sounds lovely anyway; “Salvatore’s” “beatboxing and rapping in the summer rain” is cringe-worthy, but an Ennio Morricone-worthy vocal melody saves the day. Her lyrics are more about standing out and painting an impressionist image of a character whose emotions could be relatable to her mostly young audience. They’re about the romantic idea of loss rather than loss itself, making it ideal listening for your first crush, or your first breakup and other romantic obsession. That’s why she strikes a nerve — this kind of music will always be necessary, and Del Rey and her conspirators know this. And her reference-heavy lyrics — the “ground control to Major Tom” on “Terence Loves You,” or “Freak’s” “like an Easy Rider,” for instance — are key to unlocking the past for her young fans. The helplessness of her lyrics can be problematic, but Del Rey has seemingly overcome this by throwing more attitude into the mix, which is also reflected in the imagery, in the gun-toting video for “High By the Beach,” for instance. Even when her lyrics pain the image of a tragicomic figure, Del Rey doesn’t seem to give a shit. That’s important — while tragedy can be an appealing artistic choice, the stronger command she exudes over her image and music gives off the impression that she (and her listeners) are in charge of their own destinies.