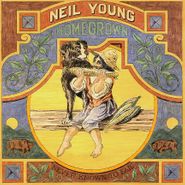 Neil Young's lost album Homegrown was finally, finally released to eager fans nearly 45 years later. Young describes this album as "the unheard bridge between Harvest and Comes a Time." Seven of the songs on Homegrown were previously unreleased and different versions of the other five songs have appeared on later Neil Young albums.