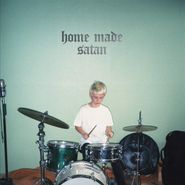 At first glance, Home Made Satan fits in almost too comfortably within the patented Captured Tracks aesthetic. The jangly guitars are immediate, covered in chorus and strummed languidly over midtempo indie pop. Songs such as “Flames” and “The Girls I Know Don’t Think So” bring a Foo Fighters-esque sense of melody to sonic territory explored by label mates such as DIIV and Minks. But this is a Chastity record, and Brandon Williams’ tendency to juxtapose disparate sounds and genres quickly becomes apparent through sudden bursts of shoegaze distortion and post-hardcore aggression. Yet for an artist whose albums feature striking contrasts of sound, the most surprising song on Home Made Satan might be its most genial. “Sun Poisoning” starts with gently strummed guitar and a melody worthy of 2000s rock radio before bursting into a cathartic, distortion-leaden chorus. Bringing back the heyday of bands like The Promise Ring and Jimmy Eat World, “Sun Poisoning” might be the most unabashedly catchy and pop forward song from Williams’ project yet.