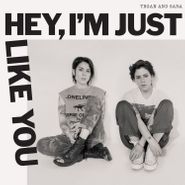 Twin sisters Tegan & Sara began their music careers at the exact same time, forming a group in high school named Plunk that, fittingly, was just the two of them. In the time between their formative teenage beginnings and the official album-length debut as “Tegan & Sara” (on Neil Young’s Vapor Records, rearranging their name after briefly toying with “Sara & Tegan”), the duo recorded multiple album length demos and countless songs lost to time. In conjunction with Tegan & Sara’s newly published memoir High School, the band has gone through these long forgotten demos, rediscovering the youthful spark and precociousness that would eventually lead to their success as one of the definitive indie pop duos of the past two decades. Yet the goal of Hey, I’m Just Like You is not to simply revisit their adolescence, as Tegan & Sara not only re-record these songs, but revamp them as well, giving them a fitting update. As Tegan phrases, “We threw in a lot of different things from the last 20-some years, and hoped that if Tegan & Sara from 1997 could get in a time machine and hear it, that they wouldn't be embarrassed by how we changed it.” Indeed, time has not been kind to some of the more angsty elements of the ‘90s singer/songwriter sect, but Tegan & Sara deftly avoid sounding dated on songs that are over 2 decades old, incorporating all the best elements of their early pop rock approach with a modern production and without any awkward ‘90s time capsule moments. Nowhere is this more apparent on the album than “I’ll Be Back Someday,” which has an indelible ‘90s power pop sensibility, made all the more obvious by the fact that the sisters haven’t written a song that remotely resembles it in well over a decade. However, nothing about “Someday” sounds recycled; its chugging guitars and bright chorus speak in a permanent pop language, with a sparkly 2019 sheen to go along with it.