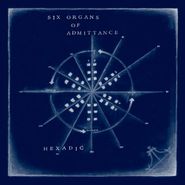 OK lots of things gets called “psych” these days when people really mean some sort of wimpy electronic pop. This is the real stuff. Ben Chasny’s Six Organs of Admittance project can really run the gamut from gentle, just-woke-up dreamy folk to full-on acid-spitting psychedelia. Hexadic falls under the latter category. It’s the closest thing to another band Chasny was in, Comets on Fire, and their skull-exploding first album, Blue Cathedral, only Hexadic slows things down to unleash slabs of ominous drone, as on the monolithic “Hollow River.” Hexadic lets up a few times, for curious little guitar excursions like “Future Verbs,” but it's mostly concerned with breaking structure and decibel level. Some of it can be quite meditative, as on the shuddering “Vestige,” but overall it’s an exercise in plugging in and totally letting go. Maybe not for everyone, but psych-heads will feast on this next-level shit.