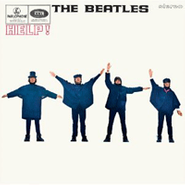 By the summer of '65, the Beatles' new sound had fully formed, and Help! is its debut. The album explodes with the whole band starting at the same time. The urgency on the title track is palpable. The guitar is ahead of itself. The bass and drums are barely hanging on until the song slows just enough to catch up and then race on to its final harmonic plea. Everything here sounds fresh and vibrant. The latin tinged bridge in "The Night Before," the folk shuffle of "I've Just Seen A Face," and the funky organ in "Tell Me What You See" are all new weapons in their arsenal. Only the cover of "Dizzy Miss Lizzy" (mad cowbell) sounds close in style to their earlier songs, but it's harder than before, and the sugary sweet love songs "You're Gonna Lose That Girl" and "You Like Me Too Much" are only lyrically like past songs. Two major highlights that preview their entire careers as songwriters are John's acoustic "You've Got to Hide Your Love Away" with its introspective lyric and mantra like vocal and Paul's simply beautiful "Yesterday." "Yesterday" would become the most covered song of all time. As great as these songs are, the best is "Ticket To Ride." George's gleaming guitar drops, Ringo's drum roll intro and machine gun breaks and Paul's single note bass line set the table for John's vocals. An absolutely perfect song, showcasing the power of the Beatles as a band firing on all cylinders. But what if they add more cylinders?