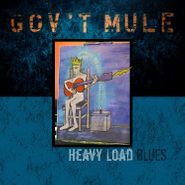 When Gov’t Mule started work in lockdown on their follow-up to Revolution Come...Revolution Go, they decided to indulge Warren Haynes’ desire to make a blues album by recording one at the same time, playing the blues at night and their usual Southern rock during the day. As expected with this level of musicianship, the project was a total success, with Heavy Load Blues available now and the new rock album due out in 2022. Tracked live, Heavy Load Blues offers satisfyingly bluesy grit with lively tracks like “Snatch It Back and Hold It” and moody slide-guitar numbers like “Heavy Load.” Elsewhere “Make It Rock” has a hypnotic Southern gothic atmosphere. It's a strong side project from a much-loved band.