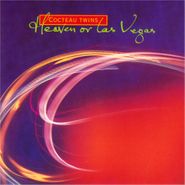 Heaven Or Las Vegas was released in September of 1990 and was the band's sixth album. Cocteau Twins had already put out five amazing albums in the 1980s. Blue Bell Knoll was released two years earlier and was my first introduction to the band. Although the first 3 albums are probably my favorites. Garlands, Head Over Heels & Treasure are the albums that I can't imagine my life without. But you really can't go wrong with any Cocteau Twins album. Heaven or Las Vegas remains a great album after all these years. The album features "Iceblink Luck," "Heaven Or Las Vegas" & "Frou-Frou Foxes in Midsummer Fires." I can't even begin to explain what this band means to me. You either love them or you just don't get them. I couldn't begin to explain to you what Elizabeth Fraser is singing about. But these songs manage to get deep down inside of me. The Cocteau Twins would only put out two more albums after this one. Four-Calendar Cafe in 1993 and Milk & Kisses in 1996. I still hope that they have another album in them somewhere. But I know it will never happen. I will be always be more than content with the brilliant albums that they have already given us. They are on the top of my list of bands that I would love to see live that I never got to see. It breaks my heart a bit.