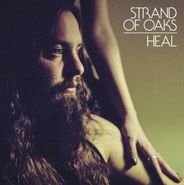 Folk artist Strands of Oak (aka Timothy Showalter) makes a huge leap on his latest record, HEAL. Facing marital woes after extensive touring, Showalter spins his emotional turmoil into rock gold, eschewing the more folk-based sound of his earlier material for a huge, all-embracing rock sound. You’d be forgiven for thinking those riffs on opener “Goshen ’97” sound like Dinosaur Jr.—that is Dinosaur Jr.’s J Mascis shredding away while Showalter unleashing his wavering croon in an ode to teenhood (“I was lonely, but I was having fun!” he cries). Showalter has made a pop record in the same way Bruce Sprinsteen does, pairing a huge drum sound and synthesizers with emotionally naked lyrics on songs like the title track (“I spent 10 long years feeling so fuckin bad/I know you cheated on me, but I cheated on myself” he sings through gritted teeth) or the hooky, Stevie Nicks-inspired “Same Emotions.” But even with Showalter’s newfound pop fixation, these are at their heart folk songs, confessional tunes that could be played on acoustic guitar and would still sound great. He pours his heart out in songs like “Shut In”—“I lose my faith in people, why even take the time?” he sings in relatable self-pity, despite the song’s huge sonic impact—and on “JM,” he crafts a sweeping tribute to the late Jason Molina of Songs: Ohia and The Magnolia Electric Co. that manages to feel both intimate and epic. While HEAL is not a small-sounding record by any stretch of the imagination—in fact, Showalter is wholly dedicated to creating a massive sound here—these are still songs that cut to the core, reserving the noise until just the right moment. His fans should be able to see that, while he’ll be snapping up plenty of new ones with HEAL who will wonder what they’ve been missing all this time.