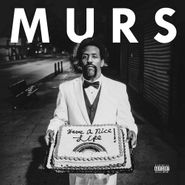 Murs’ latest solo release is as eclectic as anything the L.A. rapper has done, but it’s also incredibly solid. Free of weak tracks, extraneous skits or too many guest spots, Have a Nice Life lets Murs’ storytelling and messages shine. He starts out refreshingly honest and positive on the title track, joking about his age and extolling remaining grateful across life’s curveballs (“I don’t wanna dye my hair/’Cause a lot of my homies died before they got there”). Have a Nice Life then moves on to cautionary street tales like “Okey Dog,” a narrative about a “one-man gang … who never gave a fuck” and lands in jail, the minimal electro and grim fantasy of “Woke Up Dead” and manic “P T S D” (with E-40), which features some of the album’s best pure rapping. On the other side of the coin, Have a Nice Life balances the more serious tracks with those divulging his dealings with women over the years, from the one who got away (“Surprises”) to a star-crossed fling with a Latina bombshell (“Mi Corazon”) and other temptresses (“The Worst” details a particularly touchy groupie). Murs sneaks positive messages about leaning forward and eschewing the pitfalls of street life on songs like “No More Control,” balancing talk about taking the reins on the discussion of race and “black lives matter” with a silky pop hook by MNDR. Without ever coming across as preachy, Murs puts a positive spin on many hip hop tropes and lets his wisdom seep through naturally on the terrific Have a Nice Life.