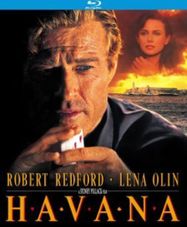 During the holiday season of 1958, professional card shark Jack Weil (Robert Redford) came to the collapsing regime of Batista's Cuba looking for a big score. When he gets caught up in the dangerous toils of the beautiful wife (Lena Olin) of a revolutionary leader (Raul Julia), the cornered gambler may find himself going all in with his freedom, and perhaps, his life. Sydney Pollack's lavish romantic epic co-stars Alan Arkin, Tomás Milián, Richard Farnsworth, Mark Rydell. 145 min. Widescreen; Soundtrack: English; Subtitles: English; audio commentary; theatrical trailer.