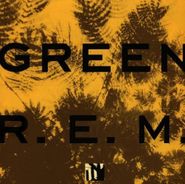 Their first album for major label Warner Bros., Green represents a significant evolution in R.E.M.'s career. Here you'll find the band moving away from the minor key ballads that had earlier defined their output, instead leaning towards major key alt rock anthems. The band continues to explore their interest in political issues, with an eclectic mix of songs such as "Stand," "Orange Crush," and "Pop Song 89."