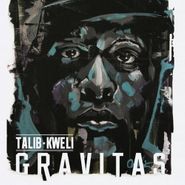 On his sixth album, and his second in under a year, Talib Kweli shows he isn’t slowing down a bit. His wordplay remains as finely honed as ever, rife with political overtones and historical references as relevant as ever across Gravitas. It’s a thrill to hear a group of vets like Kweli, Rah Digga, ALBe. Back and Black Thought trade verses over Oh No’s soul strings and ratatat drum production on “Art Imitates Life.” Kweli’s as at home with new blood on “New Leaders,” rapping alongside young Brooklyn duo The Underachievers in a rapid-fire, Kanye-esque production. Those looking for some classic Kweli rhymes need look no further than first single “The Wormhole,” railing against the Federal Reserve, World Bank and IMF with energy gleaned from the Occupy movement over the past couple of years. Gravitas harkens back to a time when the most respected rappers in the game were political and social rather than personal in their rhymes, and it’s an excellent reminder of how potent and pointed hip-hop can be.