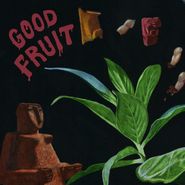 If TEEN are the lesser known trio of sisters who play under a monosyllabic, 4-letter long moniker, it’s not for lack of originality. Cheeky coincidences aside, TEEN sound almost nothing like HAIM, or really anyone else for the matter. Since 2010, the sisters Lieberman have made music that alternates between the strange and the beautiful, undoubtedly poppy in nature but always a bit deconstructed. On Good Fruit, the band’s 4th album, glitchy electronics and squelchy synthesizers are draped all over a production that remains ready for the floor. The sample-heavy “Popular Taste” sets the tone early with an insatiable groove. Like a disco track operating on a caffeine overdose, it's uncontrollably jittery and nervous, but moves nonetheless. “Luv 2 Luv” is a fittingly named update of Donna Summers-esque Hi-NRG, and “Runner” is awash with acid house klaxons. Yet despite TEEN’s ongoing hyperactive dance party, they also put forth some of the calmest, paired-down material of their career. Case in point: “Pretend,” a piano-led power ballad (replace distorted guitar with some heavy synth action) with angelic cooing that elevates the song into an otherworldly place. It stands in stark contrast to the manic movement that TEEN is known for, yet just might be their best song to date.