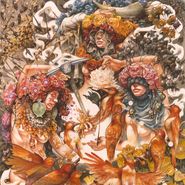 Friedrich Nietzsche once wrote, "what does not kill me makes me stronger." In the case of Baroness frontman John Baizley, that oft used quote is literally true. Having survived a bus accident while touring in 2012, each successive year finds Baizley encountering continued challenges alongside inspirations and the desire to keep evolving in his music and art. With Gold & Grey, the latest (and apparently last) in the band's series of full-length albums named after colors, Baizley and company have produced an epic work that manages to feature elements of the past while presenting entirely new sounds within Baroness' ever expanding sonic canvas. Baizley has stated that his painting for the album cover art is some of his most complex visual work yet; it is matched by some of his most engaging - and indeed strongest - music to date.