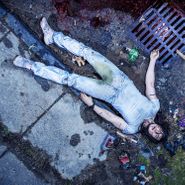 Andrew W.K. is at his ultra-intense, party-fueled best on his epic new album, God Is Partying. It's a non-stop thrill ride with terrain ranging from the heavy, ominous "Babalon" to the melodic, feel-good "I'm in Heaven," to the scorching, future classic "Everybody Sins." Proving once again that he's a mastermind in elements beyond party time, W.K. also performs every single instrument on the album. When you're as full-on as Andrew W.K., of course, you don't stop there; he also co-produced the album alongside Grammy Award-winning engineer, Ted Young (Sonic Youth, The Rolling Stones, Alice Cooper). Raw, raucous, and pure rock 'n' roll, God Is Partying will slake your thirst for new party anthems.