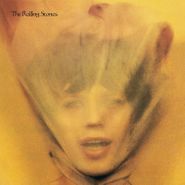 It's time for the Rolling Stones' 1973 album Goats Head Soup, which launched the number one hit "Angie," to receive the special reissue treatment, complete with multiple formats that offer outtakes, demos, live tracks and more. The 2CD Deluxe Edition features the new stereo album mix, sourced from the original session files. Probably most interesting for the Stones fan who has "everything" are the three never-before-released tracks included: the raw "Criss Cross," the funky "Scarlet" and the honky-tonk-ish "All The Rage."