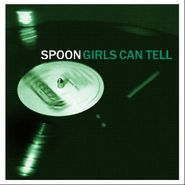 Spoon's third studio album, Girls Can Tell (originally released in 2001), is back in print and newly recut from the original masters. Their follow-up to A Series of Sneaks (1998) sees Britt Daniel developing into one of the most unique voices in rock with a stunning maturity and economy to his songwriting. Girls Can Tell is re-released as part of the Slay On Cue series, which will see the reissue of Spoon’s first eight albums in original editions.