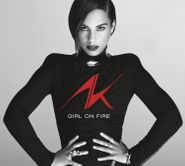 “It’s been a while/I’m not who I was before” Alicia Keys sings at the outset of her new album, Girl on Fire. As if to ease fans into the looser, poppier version of Alicia Keys, now a wife and a mother, Keys sings this line amid her fine piano playing, something which has always served as a signpost for Keys’ originality amid her R&B and pop peers. So we have two versions of Keys here, the soul songstress and the pop chanteuse. The pop tracks mostly stay decidedly tasteful, as on the cool electro-jazz of “Listen to Your Heart.” This makes the inclusion mid-album of the hip-hop heaving “New Day” and “Girl on Fire,” which features Nicki Minaj spitting verse over Keys’ stately melody and a particularly hard-hitting beat, both strange and exhilarating. When the two sides of Keys sound meld, as on the laid-back jam “When It’s All Over,” it results in the album’s best tracks. And just try to resist her putting her son talking at the end of the track — just try! Ultimately Keys remains a force because she refuses to be boxed in, not relegating herself to adult contemporary R&B even while entering motherhood. Whether or not she can compete with Rihanna, which she seems to attempt with the album’s more forceful tracks, remains to be seen, but Keys’ songwriting and performing chops make Girl on Fire consistently engaging even as it struggles for cohesion.