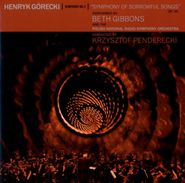 Back in fall 2014, Portishead's Beth Gibbons performed Henryk Górecki’s Symphony No. 3 with the Polish National Radio Symphony. Out now via Domino, the album marks Gibbons' first release since Portishead's 2008 LP, Third. The whole affair was conducted by Krzysztof Penderecki, known as Poland's greatest living composer, and recorded live. The singer ventures into soprano territory here (she's a contralto) and performs in the original Polish, to thrilling effect. As fans would expect, it's a lush, moving, and deeply vulnerable performance from an artist who leaves listeners clinging to every word.