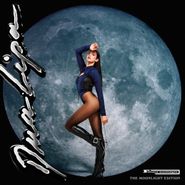 
Currently Unavailable Artist: Dua Lipa
Genre: Rock
Release Date: 05/14/2021
Label: Warner Records
Catalog Number: 655924
Recording: Studio
Length: 01:01:39
Format: Vinyl LP
Note: 2LP pressing. 2021 release. The Moonlight Edition is a celebration of what can only be described as the album of a generation. Future Nostalgia (The Moonlight Edition) features four previously unheard tracks 'We're Good', 'If It Ain't Me'. 'That Kind of Woman' and 'Not My Problem (feat. JID)' and includes the top 10 smash hit single "Prisoner" by Miley Cyrus featuring Dua Lipa. Also on the album is 'Fever'. "We're Good is the incredible lead single from the deluxe album and both creatively and sonically pushes boundaries of what people expect from Dua.

Dua Lipa’s original version of the Grammy-nominated Future Nostalgia was an impressive collection of eclectic dance-pop bangers—but now we’ve got the new-and-improved Moonlight Edition! So, what makes it Moonlight? Well, the addition of four previously-unheard cuts: “We’re Good,” “If It Ain’t Me,” “That Kind of Woman,” and “Not My Problem (feat. JID).” The Moonlight Edition also includes the absolutely killer multi-lingual track “Fever,” with Angèle, that was originally released on the French version of Future Nostalgia, plus the addictive “Prisoner” with Miley Cyrus, and the bittersweetly romantic “Un Dia” with J. Balvin and Bad Bunny featuring Tainy. One of the year’s best pop albums just got better!