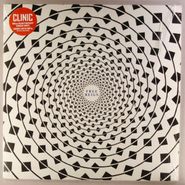 Mysterious U.K. art-rock brigade takes us on another wintry ride through kraut rockscapes, Suicide-al no wave, and outsider Monk funk. The songs evolve and flow by unseen rules, with an uncompromising mix by Daniel Lopatin (aka Oneohtrixpointnever).

Clinic continue to make burrow deeper into their sound on their seventh album, Free Reign, retaining their enthusiasm for Suicide and Can that they transformed into bizarre millennial pop on their excellent early records while incorporating touches both modern — synth stabs and warped vocals — and vintage, like the dusty organs that underpin most of Free Reign’s tracks, psychedelic ambience and surf guitar licks that pop up like humanistic darts puncturing through the alien landscape. “Miss You” is classic Clinic, slow and sexual in an animalistic, almost terrifying way, playing with lounge atmospherics only to undermine them with Ade Blackburn’s ever creepy vocals. “See Saw” stomps with garage swagger, jamming loosely on a three-note backbeat while Blackburn gives one of his more impassioned tirades. “Seamless Boogie Woogie” lurches along dizzyingly on a digitized beat, while “Misty” finds the band in horror soundtrack mode, delivering an eerie yet melodic elegy. If the title Free Reign would imply Clinic aren’t playing by anyone else’s rules, they’re definitely playing by their own, but that’s not a bad thing, as they dig into their groove even further.