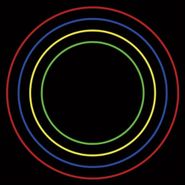 Bloc Party’s Kele Okereke said he listened to a lot of Nirvana when making Four, and it shows in hard-hitting first tracks “He Begins to Lie” and “3x3,” which re-create Bloc Party’s M.O. from hip-shaking post-punk revivalists who took an electronic detour with their previous album, Intimacy, to makers of heavy, emotionally dark rock. The visceral attack of Nirvana albums like Bleach and In Utero certainly is apparent in a song like “Kettling,” sort of a British freshening up of grunge, given Okerke’s soaring vocals, which recall another alt-rock kingpin, Thom Yorke, particularly on “3x3’s” powerful second half. The band also writes one of the best of its underrated power-ballads with “Day Four,” which calls to mind A Weekend in the City’s “I Still Remember.” It’s been a decade since the pogoing sounds of Silent Alarm, and though they rarely return to that sound — they show they can, with winning results on “V.A.L.I.S.” and “Team A” — Four successfully finds the band, who many feared were done for, full of purpose once again.