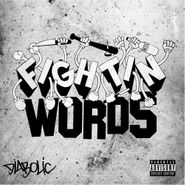 Fightin' Words is a long delayed release from East Coast rapper Diabolic which has been in the works for four years. Originally intended to come out on Viper Records, the album instead got released via the recently founded WarHorse Records. Mic collaborators include such hard hitters as Vinnie Paz, Apathy, and R.A. the Rugged Man, while production is handled in most part by DJ Premier.