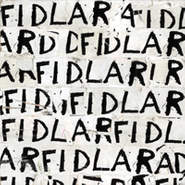 FIDLAR's long-awaited debut album is a Pabst-soaked party record with strong songwriting anchoring its punk attitude. Pulling from hardcore, surf rock and pop-punk, and with the immediacy of The Clash's first record, the foursome, made up of singer/guitarist Zac Carper, Brandon Schwartzel (bass), and brothers Elvis Kuehn (guitar) and Max Kuehn (drums), sing about being young and dumb and getting fucked up in songs with names like “Cheap Beer” (the chorus of which consists of the shouted lyrics “I DRINK CHEAP BEER SO WHAT FUCK YOU!”). But all the funny lyrics in the world wouldn't mean a thing if the songs themselves didn't captivate you, and they do, across FIDLAR’s 14 tracks. There's nary a hint of cynical sneer, and though they play with sloppy punk abandon, their hooks are tight as a six-pack ring. FIDLAR sing about who they are and what they do, whether that's waking, baking, skating in mechanical hedonism on the ferocious “Wake Bake Skate” or reflecting that said young hedonism can “kind of suck,” on the exhausted-sounding closing track. That’s a telling moment — for all of FIDLAR’s gleeful celebration, the record’s honed hooks are the sound of very hard work, and it pays off in spades.


stiv
01/29/2015 This record makes me want to relapse. It sounds like a car crash I walked right into- and stokes teenaged punk rock memories I thought were long since shrouded by binges and benders of yesteryear. It's So Good It Hurts. It's hooky and lazy . It's spastic anthems resonate in a way Strummer would've been proud to have cried at the top of his lungs. Buy this if you seek the truth. Buy this is you know what truly growing up punk rock means. Buy this if the deepest dredges of using and drinking are in OR out of your system. It's lyrically painful to listen to for a handful of those reasons. But this is their lives. And mine at one time. I would't change a thing. They tell the truth. They're fuck ups with no money, some pretty girls and ....depending....too many narcotics or never quite enough. This record is fucking genius.