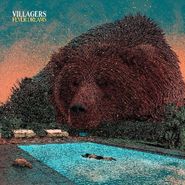 Fever Dreams is an appropriate name for Villagers’ fifth studio album. It’s a heady, euphoric, transcendent affair. The record was recorded with a full band in late 2019 and early 2020, then refined by frontman Conor O’Brien in his Dublin home studio during the slow, isolated days of the pandemic, before going off to get mixed by David Wrench (Frank Ocean, The xx, FKA Twigs). Maybe that’s why the album sounds so imbued with a blazing hope, a refusal to give up on joy. This ebullient indie album will make you believe again.