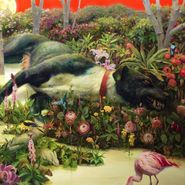 While younger rock fans may be getting their Led Zep-lovin' licks from Greta Van Fleet, older listeners have been enjoying the classic rock riffs of Rival Sons for the past decade. Steadily building an arsenal of hook-laden albums, the group's first outing for Atlantic Records Feral Roots is more of what their fans have come to expect: well-crafted bluesy rock with a heavy retro seventies sheen that still sounds contemporary. With songs and swagger this strong it's no surprise these Sons were asked to be the openers of Black Sabbath's final tour.