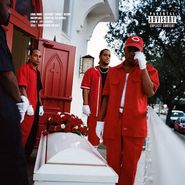 Boogie’s 2019 release Everythings For Sale is the Compton, California artist’s official debut album (via Eminem’s Shady Records) following a series of strong mixtape releases by the unique rapper/singer. As the album’s cover art of a coffin at a funeral might indicate, Everything’s overall mood is somber. But that’s not a bad thing! The antithesis of braggadocios party rap, Boogie’s soul-bearing, bold and brutally honest self-examination of his life experiences to date (from death to bad relationships and self-doubts) is refreshingly real.