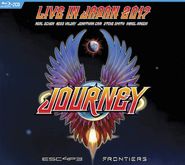 Journey's 2017 concert on Japan's legendary Budokan stage featured both the hits and deep cuts from their classic albums Escape and Frontiers. Including songs like “Lay It Down” and “Back Talk,” which hadn't been heard live since the group's original tours, the epic performance is available now on DVD/Blu-ray+2CD, just in time for the 35th anniversary of Escape. The talents of original members Neal Schon, Jonathan Cain – whose synthesizer sound Steve Perry has credited for the success of the two albums - Ross Valory and Steve Smith are as solid as ever, while Arnel Pineda delivers the soaring vocals so familiar to Journey fans.