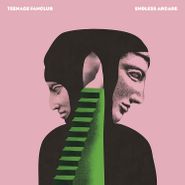 Scotland's Teenage Fanclub has released their first new studio album since 2016's Here. Since then, co-founder Gerard Love has left the band, but Euros Childs (of Gorky's Zygotic Mynci) joined up on keyboard, adding more retro psychedelic flair to the group's gentle indie pop. "The Sun Won't Shine on Me" is a jangly example of this influence. "I'm More Inclined" is an album highlight with its catchy chorus, along with opening track "Home" and its uplifting guitar solo in the bridge.