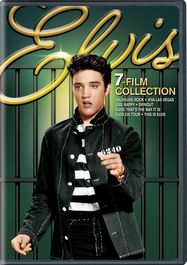 Seven-disc set includes: Jailhouse Rock (1957)Warden threw a party in the county jail... Perhaps the quintessential Elvis film casts him as construction worker Vince Everett, who's tossed into jail for killing an angry drunk in a barroom brawl. Learning to play the guitar from a fellow inmate, Vince becomes a recording star after he's released, but will fame go to his head? Elvis performs a selection of Leiber-Stoller songs, including the title tune, "Treat Me Nice," "(You're So Square) Baby I Don't Care," and more. With Mickey Shaughnessy, Judy Tyler. 96 min. BW/Rtg: NRViva Las Vegas (1964)In one of his biggest and best films, Elvis Presley is "just a devil with love to spare" as hotel waiter/race car driver Lucky Jackson. Trying to get money for a new engine so he can enter the Las Vegas Grand Prix, Lucky finds himself competing with rival racer Count Mancini (Cesare Danova) on the track and for the attentions of sexy swimming instructor Rusty Martin (Ann-Margret). With William Demarest, Jack Carter; songs include "The Lady Loves Me," "What'd I Say," and the title tune. 85 min. C/Rtg: NRGirl Happy (1965)It's musical fun under the sun at spring break in Ft. Lauderdale, as rocker Rusty Wells (Elvis Presley) lands his combo a gig in Florida... as long as he agrees to chaperone Valerie (Shelley Fabares), a mobster's coed daughter. And when she falls for the singer, the fun really starts. This one features Presley performing "Spring Fever," "Startin' Tonight," and the classic "Do the Clam." With Harold J. Stone, Gary Crosby, Nita Talbot, Mary Ann Mobley. 96 min. C/Rtg: NRSpinout (1966)With three women out to snare him, racecar driver/singer Mike McCoy (Elvis Presley) sure has his hands full-but what a fun problem to have! Will Mike choose the spoiled rich girl (Shelley Fabares) who always gets what she wants, the author (Diane McBain) who sees him as the prefect male specimen, or his band's tomboy drummer (Deborah Walley)? Dodie Marshall, Jack Mullaney. Includes the title song, "Stop, Look and Listen," "All That I Am," and more. 93 min. C/Rtg: NRElvis: That's The Way It Is (1970)One of the first and best concert documentaries on Elvis, shot during his 1970 Las Vegas Strip appearances, features rare backstage footage, interviews with fans, and over two dozen songs-"Suspicious Minds," "Love Me Tender," "Bridge Over Troubled Water," "In the Ghetto," "Can't Help Falling in Love," and more-as only the King of Rock 'n' Roll could perform them. PG-rated version; 108 min./2001 special edition; 96 min. C/Rtg: NRElvis On Tour (1972)Long live the King! This Golden Globe-winning documentary chronicles Elvis Presley's whirlwind 1972 tour which saw the legendary singer play 15 cities in 15 nights. Shot in a multi-cam format, the film includes rehearsal and backstage footage (including some of Presley's kung-fu moves!) as well as captivating live performances of his biggest hits and montage sequences that were supervised by Martin Scorsese. 93 min. C/Rtg: GThis Is Elvis (1981)Entertaining and informative, this documentary on "the King of Rock and Roll" features home movies, rare concert footage, newsreels, and dramatic re-enactments. Told in a unique fashion by Elvis himself (through use of an impressionist), the film traces his life from boyhood to his sad, untimely death. Songs include "His Latest Flame," "That's All Right," "Hound Dog," "Love Me Tender," more. PG-rated version; 102 min./Extended version; 144 min. BW&C