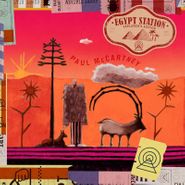 Paul McCartney's hit LP from 2018 is back in an expanded edition, featuring a second album's worth of unreleased and live tracks. Songs like the ELO-esque "Get Started," and the eclectic, electronic based "Nothing For Free," both add to the combination of McCartney's nostalgic trademark sound and his modern musical evolution so apparent on Egypt Station. The standout bonus track may be the reggae tinged "Frank Sinatra's Party," which cooly struts as McCartney recounts the faces and events of the iconic crooner's desert party.